More than 80% of general households in Japan have an electric toilet in their own home and it has become essential in our lives today.

Why hasn’t such a great invention become widespread outside of japan in this global world?

We focused on Southeast Asia and found that there are some reasons for that.

Reason 1 : Not Having an Electrical Outlet Near the Toilet

Most of the major Japanese bidet toilets such as TOTO, LIXIL, Panasonic and TOSHIBA require electricity.

However, it is uncommon for the majority of countries to have an electrical outlet near the toilet, which is supposed to be one of the major reasons for not having electric toilets.

Other possible reasons might be that power voltage differs from country to country and that power supply is not always stable.

Electric toilets are operated by motors.

Unlike in Japan, hard water is more common in most of the countries in the world.

If electric toilets are used in those places, a motor can get damaged by clogged calcium minerals and pebbles in only a few years.

Due to inadequate hygiene educations, some male users fail to put the seat up while using, causing poor toilet sanitation in many Southeast Asian countries.

According to a questionnaire for local people, public toilets are often so dirty that they require washing with a hand-held bidet shower* before using.

Considering the risk of an electric leakage, electric toilets are not the best choice.

Hand-held bidet shower also known as “water gun” is a bidet spray which is commonly used in Southeast Asia instead of a bidet toilet for cleansing of anus or genitals after using the toilet.
The shower is also used for cleaning the entire toilet when it is unhygienic.

There are also other reasons than those above.

Japanese luxury toilets are generally priced from 300 to 450 USD in Southeast Asia, so they can be targeted for stealing if installed in public facilities.

The price and the risk of damage are also considered to be the reasons that hinder success in those countries.

In the first place, there is little demand for heated toilet seats in countries with warm climates like Southeast Asia.

Most people are reluctant to have one because removing a hand-held shower seems to be a big problem for them.

For the reasons above, it has been taking so long for electric toilets to be accepted worldwide and many people have never even used them before.

It seems normal for people living in Japan to have access to clean toilets, but that is not the case with many others around the world.

A bidet toilet is hygienic in that it prevents water from splashing on the floor and the seat and that there is no need to wash the entire toilet anymore.

In the long run, it can reduce both water and toilet paper consumption and will improve the environment as well as sanitation.

Thus, bidet toilets are one of the Japanese greatest inventions that is not only comfortable to use but also environmentally friendly.

But, how many of Japanese living overseas have had no choice but to give up on a bidet toilet due to the lack of electrical outlet?

We’ve got your back.

Here is the good news for you.

Ever heard of the non electric shower toilet before?

You will never have to be worry about the problems above anymore. 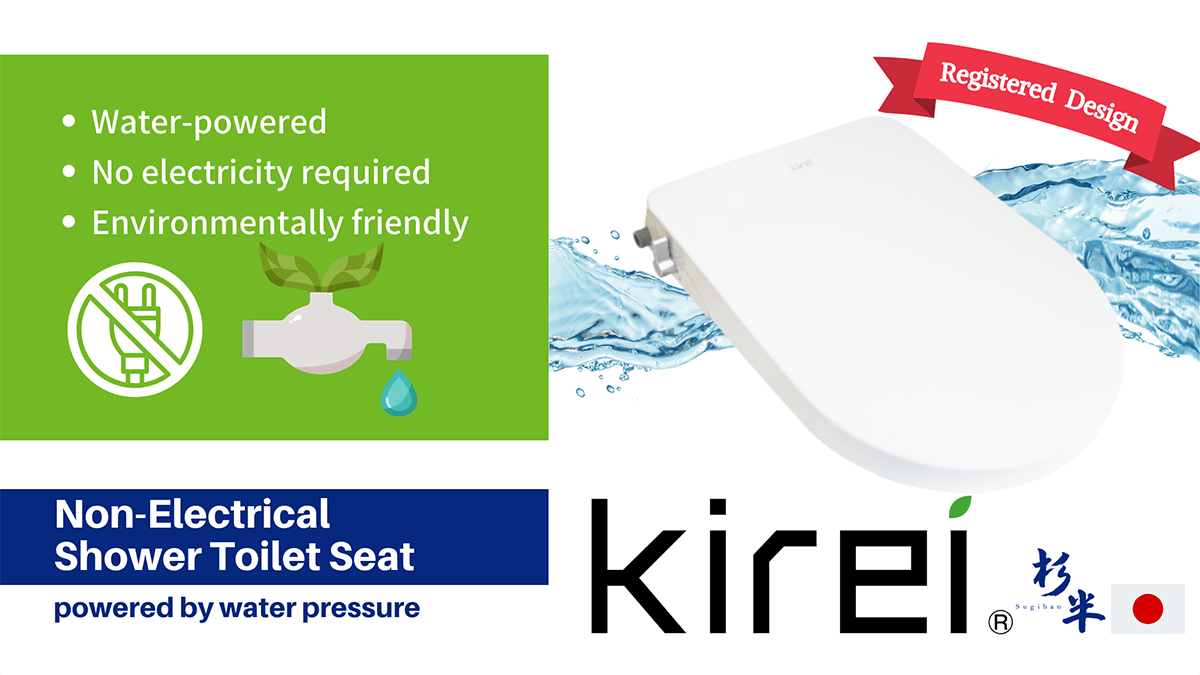 2022.05.24
“Kirei”: What It Is, How It Works Without Electricity and Why It Can Be Used Around the World
As stated in the previous post, electric toilets are basically unavail...